Well, our program is sadly over. I put the pictures from our three day trip on the Picasa website, you can see them by clicking here:

picasaweb.google.com/brimurray
Posted by Brian at 4:51 PM No comments:

This week was a very busy week. We finished our last classes on Wednesday, the students to a test to see how much they improved on Thursday, and they rehearsed and performed in the Fête des familles on Friday. Thanks to a French host father, some of us even got the chance to go to the army base and ride in a tank: 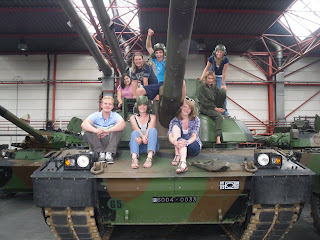 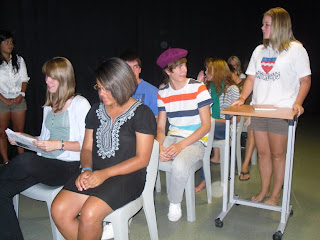 On Friday, we took a break from rehearsal and took a tour of the school and its amazingly beautiful chapel. Below is a photo of all of the students in front of the school: 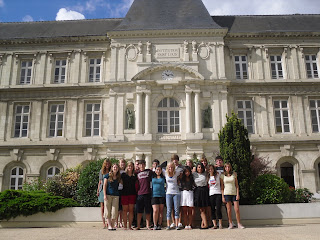 During the visit of the chapel, we had the students sing a song for us, you can see that video on my picasa site http://picasaweb.google.com/brimurray

Most importantly, last night was the first IU Honors Program Fête des familles in Saumur. This is an evening where the students thank their host families for everything that they have done for them through short plays and song.

In the beginning of the program, we told students that we wanted them to write their own skits about a common them to be chosen by the students. It was not surprising that the students chose to write about experiences similar to the ones that they had. Each sketch had at least one American character and took place in France. The students wrote about stereotypes, the arrival in to their host family's home, the classroom, and the festival of music. Each sketch had at least one song. 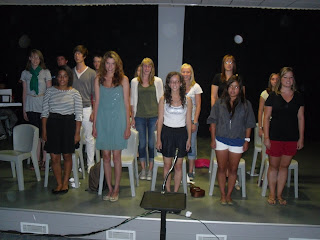 You can see all of my photos and video on the picasa site. Sorry for the image quality, my camera doesn't work very well in low light situations:

Last but not least, this Thursday was Sarah L.'s birthday. She surprised her fellow students with some cookies. Joyeux anniversaire Sarah! 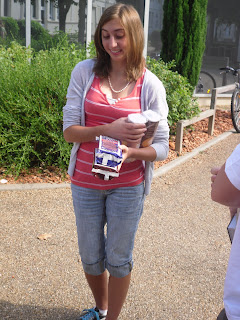 Early tomorrow morning the students are going to say goodbye to their host families and Saumur because we are leaving for Paris. I would like to thank the host families for everything that they have done for their stagiaires and hope that their first experience with the program will be unforgettable.
Posted by Brian at 12:31 AM No comments:

I would like to start this post off by wishing Rachel B. a happy 18th birthday! Joyeux anniversaire Rachel!

It has certainly been a busy week full of class and activities for all of us here in the program. Here is a photo of all of us in the school courtyard. The groundskeeper Rémi wanted us to feel more at home and put up a Statue of Liberty and an American flag.

On Wednesday, we were invited to witness the 14 juillet (Bastille Day) military ceremony and parade. If you were not aware, Saumur is a city that has a large military presence.

After the ceremony, we were invited by the city to have what the French call "un verre d'amitié (a drink of friendship)" and listen to a speech by the mayor of Saumur. The students who went to the event ask the mayor if they could take a photo with him:

During the evening, there was a fireworks show over the Loire:

Horses, dirtbikes, and tanks oh my! On Friday afternoon, we were given free tickets by the city to see the famous Carrousel de Saumur put on by the military.

There was even a presentation of the evolution of tanks. My favorite was the American tank, the biggest one of them all.

I would like to thank the city of Saumur for being so kind to us during this program. Without their generosity, we wouldn't have had the chance to see as much.

It is hard to believe but the Stagiaires (that's what we call them here) only have one more week left in Saumur. During this next week, students are going to have their last classes, take a test to see how much they improved during the program, and rehearse for something we call "La fête des familles" (an event full of music and skits for host families).
Posted by Brian at 1:50 PM No comments:

Today (Saturday), the students had the choice to take the train and spend a few hours in the city of Angers. More than half of the students came.

We took in the sites such as the chateau and many of the students did a lot of shopping.

Yesterday was our third excursion for the program. We first took the bus to the very edge of the Ile de Ré, an island that is just off the coast of France. We started off our visit with the Phare des Baleines ("Lighthouse of the whales") located in Saint-Clément-des-Baleines.

We climbed the 257 steps and got to see a fantastic view.

After the lighthouse, students explored the small village and its many different souvenir shops that it had to offer.

We picnicked with a view of the ocean in the port town of Saint-Martin-de-Ré and then the students discovered the town in small groups. 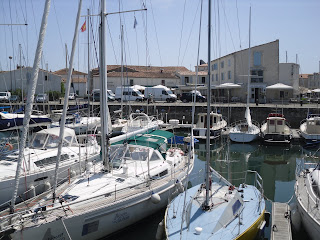 After our visit of the city, the students finally got a chance to go to the beach and cool off in the water: 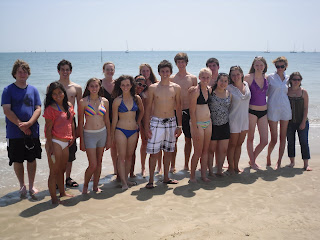 We finished our excursion with a quick trip to La Rochelle, a city connected by a bridge to the Ile de Ré. 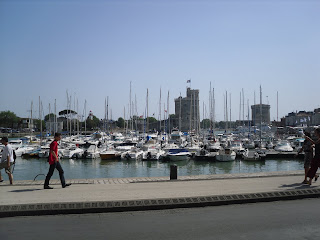 Below you can see a group photo of all of the students under the arcades: 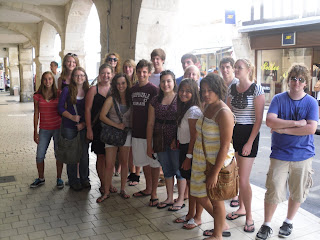 We took the bus back to Saumur. We made the time go by quicker by singing songs in the bus. :)
Posted by Brian at 10:15 PM No comments:

We have been mentioned three times by the press (that we know of) since we have been here in Saumur. The first time was a small description on the local newspaper Le Courier de l'Ouest - Saumur.

Our second mention was for the diner with the US consulate, there was just one line about the program.

In today's Saumur-Kiosque, an online newspaper, there was description of the program. You can see it at the following link:
http://www.saumur-kiosque.com/infos_article.php?id_actu=4153
Posted by Brian at 6:52 PM No comments:

The guide taught us much about things such as the history and the architecture in the city. After the tour, the guide took us to city hall for a reception with representatives from the city of Saumur.

During the reception, the representatives had us discuss their favorite moments in France and then asked us to draw them...

...and present them to everyone else. Many of the common themes were excursions (chateaux, Normandy) and the city of Saumur.

My favorite part of the reception was when the representative put down a red ribbon on the floor and told us that one end represented someone who did not speak French at all and on another end represented someone who spoke French very well. Most of the students put themselves at the end that did not speak French very well while the professors put themselves closer to the other end.

That same representative then asked us where we would like our French to be later on. As you can see, our students all want to become better French speakers.

Here is a group photo of everyone together (including Sonya Stephens - without her help this program would not have been created):

After lunch, the students and teachers went to the Cavalry Museum of Saumur for a visit...

...followed by a stroll along the Loire.